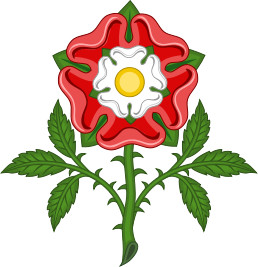 The reign of the Tudors is a fascinating period in our history and has all the essential ingredients for great drama. With the Powerhouse trade mark mix of performing styles, this fast paced,fun and informative show was very well received when it first ran successfully (twice) in 2010. The shows success hinges on keeping the show accessible and inclusive and involving the audience on a fascinating journey. ‘Our Tudors’ is recognised as a valuable resource by teachers and a very positive testimonial can be viewed on the schools page on this site. Read reviews. 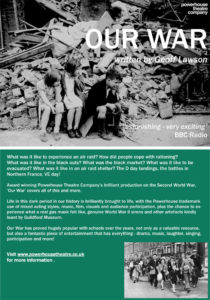 This show on the second world war, was first produced in 2005 and was brought back twice in the same year to meet the demand from schools. With the support of Guildford Museum the show featured genuine artefacts of the period, including an air raid siren, gas masks, ration cards etcetera. The show covered everything from rationing, evacuation, the rise of fascism, black market, air raids, Normandy landings VE day and lots more! This was the first in the ‘Our History’ series, was produced by Vanessa Ford Productions and ran at Guildfords Electric Theatre. Read reviews. 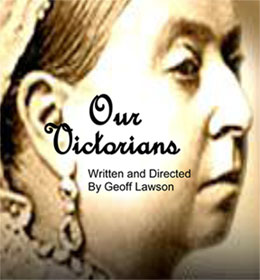 Using the same ingredients as ‘Our War’, ‘Our Victorians’ was performed in a predominantly Music Hall style, with audience participation songs, monologues and slap stick comedy. The show covered the industrial revolution, the invention of steam driven machinery, women in service, the match girls strike, the dangers of mining, the great exhibition and the British Empire.

It’s important to note that in each of these shows all of the multitude of characters were played by just three actors! The success of the show is due to a combination of talent, virtuosity and lots of velcro!

Powerhouse have worked with a number of schools on a variety of shows including:

Christs College, who were partners in the show ‘Phantasmagoria’ providing enthusiastic drama students (and their marvellous drama studio for some rehearsals!). Some of the participants had never performed in front of an audience before and the entire experience was very rewarding for all concerned.

Sandfield were also part of the ‘Phantasmagoria’ project. The school have a large proportion of children of asylum seekers and children with English as a second language, who we thought could benefit from working on a creative project. Powerhouse provided a visual artist who worked with the children in the school, designing and making the various props required for ‘Phantasmagoria’ including giant teapots, cups, saucers and cakes!

Also part of the ‘Phantasmagoria’ project, County school were active participants in providing students who had an interest in singing, but were perhaps unsure and nervous about doing so. The after school sessions were used to help to build their confidence and they ultimately delivered a great performance in the theatre tent at the Loseley Festival.

Powerhouse have also run workshops and performed shows in many schools and colleges across Surrey and Hampshire.