Our award winning portrayal of Katie Metcalfe’s story “A Stranger In The Family” has been performed twice in 2007 and 2012. The play delt deftly with this difficult subject using a sensitive mix of pace, humour and multimedia. We believe that theatre can make a huge difference to our experience of the world and this play has the capacity to literally change lives. Please take a look at some of the comments we received after the show.

The play has been endorsed by:
National Centre for Eating Disorders, beat, Katie Metcalfe. 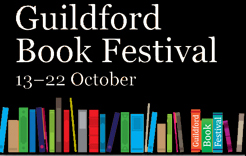 We were pleased and proud to have been invited by the Guildford International Book Festival to perform a rehearsed reading of ‘Mr Carroll Invites’ for the Festival Readers Day.

Life Model is a state of the nation play which ran at the Electric Theatre October 2009.

Hidden House Mysteries was a site specific play specially commisioned by Guildford Museum that played in the museum in December 2009.